ONLY TO ME: Installment 4

I worked as an art director for a pretty long stretch, I mention this to locate the story in an office atmosphere; a carpeted, cubicle culture, with artificial light and softly whirring computers. I had one of the few windows to nature but don't get excited, It was maybe 14 inches wide and 5 feet or so high. Odd? Yes. It faced north so no sunlight could stream in but it did allow a swath of technicolor into an otherwise drab interior. The other odd thing was that part of the building was about four feet below grade so the window gave a low point of view to the uncubicled world outside.

The space had been vacant for years so we were the first humans to occupy the area for some time. That may have contributed to the ease at which the local Turkey brood strolled past my window and among the grounds and parking lot although, in my experience, turkeys strolled wherever the hell they felt like until one of them got spooked and they would blast away in a flurry of feathers and squawks.

At that time I fancied myself to be a Jr. naturalist and with spring in the air I knew it was mating time for turkeys.  I had been watching the daily pageant for several days and found it difficult not to take advantage of the perfect blind I found myself in, at times no more than 24 inches away. The brick wall and double thick tinted glass blocked all sound and movement within. It was a stunning view.

My feeble studies did not prepare me for the vicious attack one bold bird launched at my odd window one day. A turkey, lets call him Fred, had stopped mid stroll, he was about 8 feet away at the time and had just noticed, I suspect to him, a most perfect rival in the reflective quality of my of my odd window-mirror. Fred slowly rose to full height then gave it one more skootch, i suspect, to give emphasis to his superior bulk. I found myself standing and skootching as well.  Fred paused, he seemed to be comprehending that his reflective rival had just matched his bulky display. If he did notice he did not dawdle for he launched at the window a ferocious attack with such bone cracking speed that I nearly soiled myself. Take it from me if anyone could convince the head Turkey that no single human could withstand such an onslaught Turkeydom would reign supreme.  The initial blitz was a crazed combination of battering wings that clacked against the glass, combined with scalpel sharp clawed feet that slashed here and there,  and a staccato barrage of precise, pulverizing, pecks with such terrifying speed that an accurate count would be impossible, all this while slowly rising as if gravity had just looked the other way. I was frozen with fear.  If the glass had not proved sufficient I would have surely been mauled to a raw hamburger like consistency. Fred too had stopped and backed up a bit. With a weary eye he took careful assessment of this most worthy opponent (see visual aid) 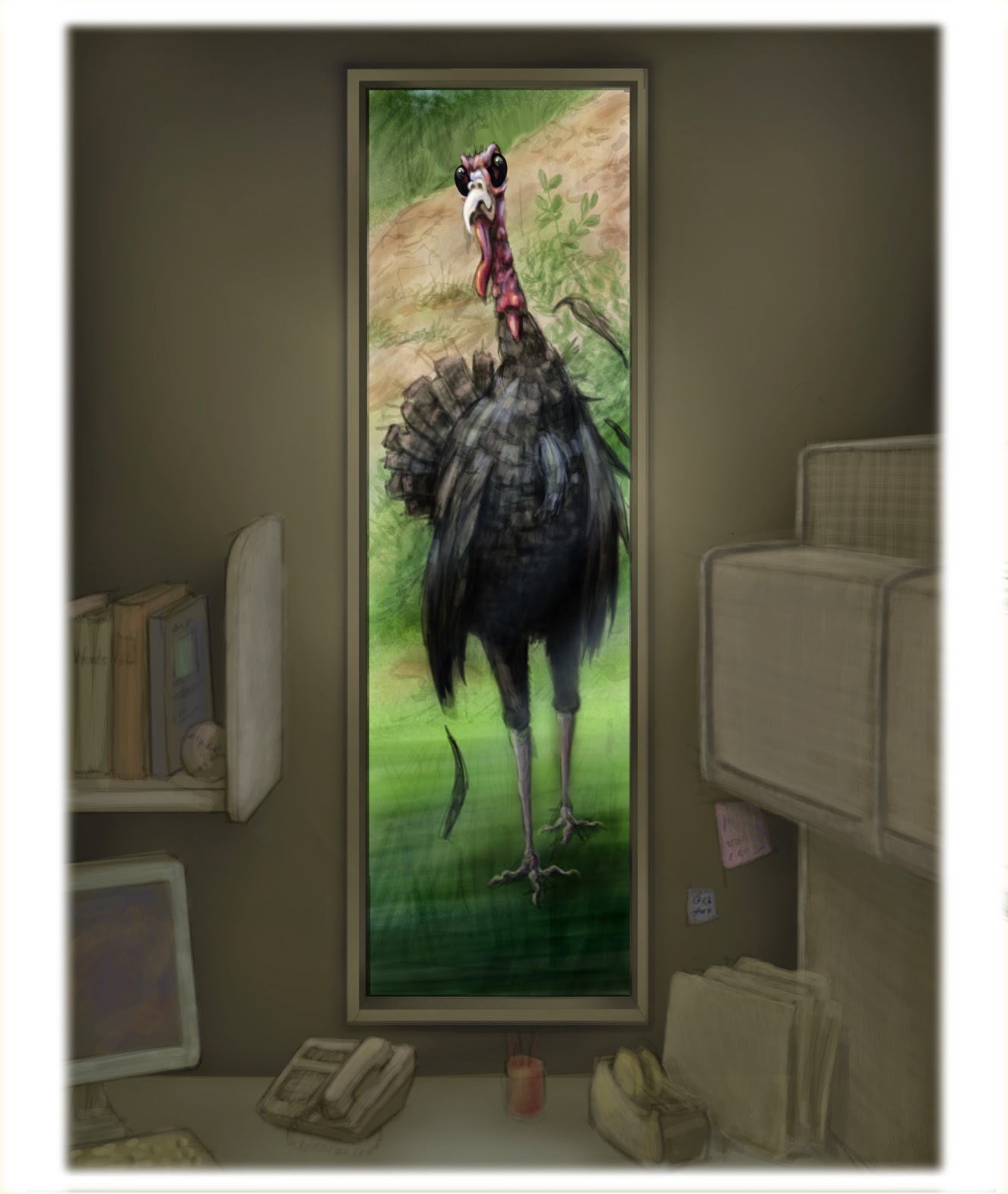 I had recovered enough to note I was several feet from the window where I cowered next to a file cabinet, clutching my coat and emanating soft cooing sounds.   Fred was once again looking with what I took as dismay and I began to imagine his thoughts a such: “Damn this turkey is good, I gave him my best beak-beak, beak-beak, claw-claw-claw-claw, wing bat- wing-bat combos several times and even mixed them up and he matched my every move... he even managed to match me beck for beak, peck after peck after peck, time and time again....Damn".

Undaunted at first, Fred gave it a few more goes. Quite a crowd had gathered on my side of the blind but he must have eventually decided to end it at a draw and with one last menacing glare moved on and, I suspect, secretly hoped that this most worthy adversary would never try to step out of that odd shaped cave again. 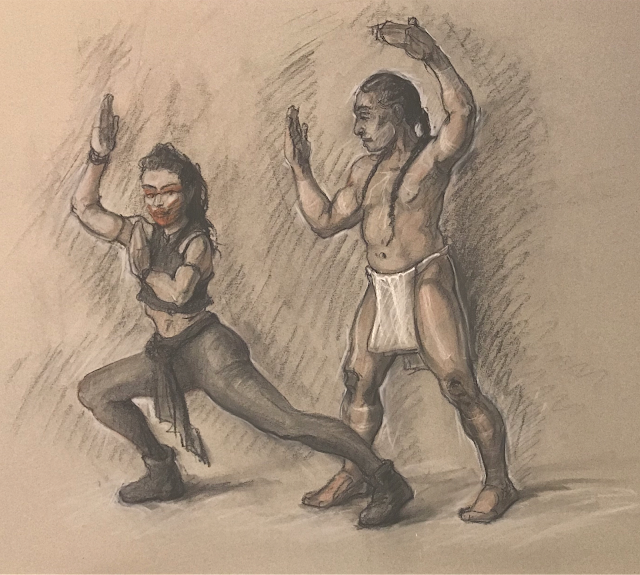